McGoohan on other people's Minds . DISinformation - How fallacious Fan-fables control the present by controlling the past.

As I have explained in some of my earlier blogging, the initial Prisoner cult clubs began around 1978, but around ten years later began to percolate their Information into the mainstream. This began with the first book outside of the cult itself in 1988, The Official Prisoner Companion. Presumably the word "Official" was used to define this publication from the club itself, which is ironic as the book largely perpetuates the many misconceptions and outright errors of the so-called research carried out by that club as well as beginning to invent it's very own fables, as I discussed in my first two or three Blogs.

Regular magazines were evidently published to the Prisoner Club subscribers in the 1980's, disseminating information to all of them. Much of the information seems to have relied solely upon various interviews with cast and crew members of The Prisoner, who were eagerly invited to various Conventions. These witness statements were made decades after the events, and were sometimes woolly and often a statement from one individual seemed to contradict the statement made by another individual. An outstanding example of this is the Prisoner writer, Lewis Greifer, who is reported by the cult members as saying in interview to them, that he and his friend, the ultimate script editor, George Markstein were discussing the concept of the prisoner before the involvement of Patrick McGoohan! On the other hand, the opinion of Bernie Williams, a young assistant director then, (and since a major Hollywood producer) was given unequivocally and is publicly available on an A&E video interview. He is quite clear that McGoohan was constantly under pressure from every member of the crew for direction and purpose from the very commencement of filming in Portmeirion.

Such contradictions are rarely resolved factually. Influential club members simply seem to elect to believe one version of events over another version and as the most up-to-date book published to accompany the Network's 2008 dvd set, reveals, these incorrect versions of history pervade even the most honest attempts at analysis to this day. 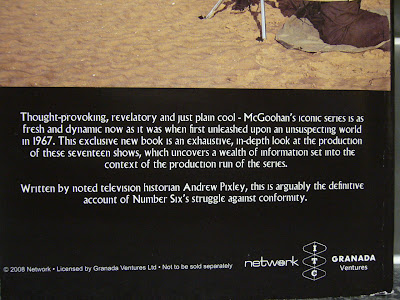 This often impeccable book refers to these contradictions but then, without any overriding definitive reason simply states that it was "in fact Markstein" who initiated the entire concept [page 11] . On the previous page however there is damning evidence of how much this book relied upon fallacious fan-club material for this opinion.

The production Guide states that Markstein worked as a crime reporter in Liverpool. I have seen no evidence that this is true. I have documented evidence that Markstein never left London and was in fact employed at the 3rd US Airforce base in South Ruislip as one of the writers for their Airforce Base newspaper, the UK Eagle. Markstein is also referred to as working for the Stars & Stripes military newspaper. He never wrote for that 'paper. As late as 1963, he was still suborning himself from the UK Eagle house magazine, as a correspondent for 'The Overseas Weekly', known to the American GI's of the time as 'The Oversexed Weekly', in light of its constant 'racy' content. 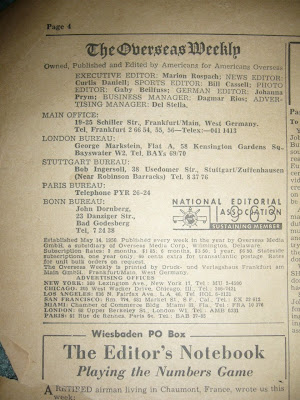 Because the cult stories and versions of history were never based on verifiable facts or even documented evidence the errors about George Markstein have significantly influenced the muddle about the series' production history. Many accounts even suggest that this man (who was born in 1929 making him 15 in 1945) had been involved with WW2 espionage! Unquestioning acceptance of this sort of legend have added unwarranted credence to the influence he had upon the TV series. As mentioned, the page of The Overseas Weekly I have scanned is from 1963. George Markstein did not even have a job in television three years prior to the inception of The Prisoner. It is worth remembering that he did not originate a single episode of The Prisoner, whilst McGoohan wrote at least three single-handed. Markstein finally wrote his first novel, but not until 1974, seven years after The Prisoner. His creative credentials simply do not justify the claims made on his behalf by the cult of The Prisoner..

In 1996, an American broadcaster commisioned Scott Apel to commentate upon the series for Channel KTEH in America as they broadcast the series in an episode order that had been concocted by them to try and *make sense* of The Prisoner. These commentaries naturally influenced those watching the programme and some of the ideas are as interesting as any others in regards to the themes underlying elements of the show. However, the information about the history of the production reveal a fascinating mixture of the insidious influence of the cult myths whilst simultaneously making completely contradictory statements about the same history. Some examples will make this clearer.

An Official book from 1988 stated that Living in Harmony was somehow censored by CBS in 1968 (see earlier Blog), yet an American expert evidently knew that this story was nonsense, but rather than challenge it, he instead puts a whole new twist on the legend and states that the series only had a sixteen week slot and so one episode had to be dropped. The expert knew the cult-myth was was incorrect but rather than find out the real reason for the episode that I have explained in the blog referenced, the self-styled expert merely invented a whole new *fact* !! As can be seen from this contemporary press cutting, there is no doubt whatsoever that the series was initially expected to run for the full 17 episodes. 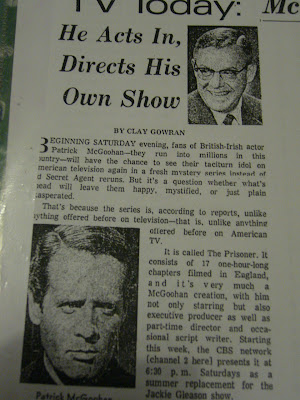 It is especially annoying that the KTEH channel should commision an apparent expert and then present what was at best, a wild guess, as historical fact. Apel presents various ideas about what he calls the Symbology of the series and that is fair enough - you can agree or disagree, which is quite the purpose McGoohan desired of his show, but for Apel to present physical, real-life history in such a slap-dash manner is quite reprehensible. He was of course following the lead of the cult clubs.

The story of Living in Harmony and its absence from the schedules is a simple one, but the truth is so hard to find primarily because of a complete lack of any research scholarship in the past. There is a very strange passge in the 2008 Network book, which reads: Following The Chimes of Big Ben there was a one-week pre-empt before the series continued in standard UK order for a further eight episodes [page 66 ironically] I have no idea what this is even supposed to mean; but it is yet another unresearched version of the story I have fully explained here: http://numbersixwasinnocent.blogspot.com/2009/06/who-controls-past-controls-future-who.html

The story of the Harmony episode is a cautionary one, but apart from the stupidity of it all, with different factions of the interest group believing different versions of real-life history, as if it was equivalent to their differing opinion of what the show itself *meant*, it creates no real problem. However, the Creation Myth of the cults is more troubling. Scott Apel and KTEH amplified the still-echoing fallacies in 1996, as this video shows:

Apel perpetuates and amplifies the myth that George Markstein was the creative force behind The Prisoner and compounds the injury by then apparently congratulating McGoohan on the things he contributed.!!. The symbology of this is what we British would call Adding Insult to Injury.

It is of interest to note that in 2005 and in 2008, the only document claimed as extant that Markstein had anything to do with creating the prisoner was a *four-page* document. I have even seen a qualification of this story that the original of this was most certainly typed on Markstein's typewriter; implying that whilst no actual creative origination by Markstein can be corroborated, the use of his typewriter is proven !! Anyone interested in The Prisoner must surely take careful note that George Markstein was employed by Patrick McGoohan's Everyman company as a Script Editor. It would therefore be his job to type up such documents. There appears to be no evidence to demonstrate that Markstein did in fact originate this material in a creative sense. Interestingly, in the 2008 Network volume, two of the original writers' statements are referenced:

Page 117: Anthony Skene [writer of Dance of the Dead]: "I saw not one piece of paper" recalled Anthony Skene..... concerning the lack of a writers guide from Markstein during his meeting at MGM... "the show was a cosmic void. They sat there waiting for ideas...... a free hand? Oh God, yes!"

Page 129: Vincent Tilsley [writer of Chimes of Big Ben]: Vincent Tilsley received a call from George Markstein......... This was at a time when there was no format document and all that Markstein could offer the prospective contributor was a script for Arrival.

These two statements not only corroborate each other, which is a rare instance in the cult of the prisoner, but also give the entire lie to the idea that the script editor was even doing his job properly, never mind originating any of the ideas for the show. They also appear to contradict what has been published in even the more reliable prisoner history books: Dave Rogers, 1989: "What is beyond doubt, is that well before production got under way Markstein produced a four page writers brief."

Where Scott Apel got his idea that a sixty page outline existed can only be traced back to comments by Patrick McGoohan, who mentions a detailed brief he placed before Lew Grade. He mentioned this document to Warner Troyer in 1977:

I wrote a 40-page, sort of, history of the Village, the sort of telephones they used, the sewerage system, what they ate, the transport, the boundaries, a description of the Village, every aspect of it; and they were all given copies of this and then, naturally, we talked to them about it, sent them away and hoped they would come up with an idea that was feasible.

Presumably McGoohan would have passed this document to his script editor, as any Producer would. What then happened to it ? Nobody seems to know. Truly the web of disinformation about the production history of The Prisoner is worthy of the very best the village could ever have thrown at the hapless, but never helpless Number Six.

Merry Xmas from Moor and I look forward to seeing you in 2010.

McGoohan on your mind? - Stage Whisper

I may, in earlier polemical blogs, have mentioned the play Serjeant Musgraves Dance that Patrick McGoohan performed in, in 1961, that has some elements that he seemed to exploit in his Fall Out episode, six years later. The play is finally being released by Network in February next year.
http://www.bva.org.uk/node/1027438


For anyone interested in the origins of The Prisoner, this might be more essential viewing than Orson Welles' movie version of Kafka's The Trial.

This is the contemporary review from "The Stage", the British theatre magazine.

"Drama set in the past that shrieks with symbolism must have some contemporary significance. So it is with Serjeant Musgrave's Dance.

John Arden's play set in an isolated strike-bound colliery town in Victorian England about a macabre recruiting party led by a religious fanatic on a mission of expiatory vengeance is a stark cry against war and imperialism mingled with a more obscure message condemning violence as a means of ending war and injustice. That at least is one interpretation.

His dramatic technique shows strong Brechtian influence, with poor humble people sprouting wisdom and rhyming couplets. Patrick McGoohan gave a powerful, sustained, and brilliant portrayal of the Serjeant - a giant of a man filled with guilt and righteousness, irrevocably committed to his insane search for atonement."
Posted by Moor Larkin at 11:12 No comments: Links to this post