In 1991 a magazine called The Box interviewed Patrick McGoohan extensively about The Prisoner and his creation and management of that show. Almost no fan site or book seems to refer to this interview. The byline to my Blog is taken from that interview. The interviewer was admirably meticulous in his transcription. One exchange may give some clue why this generous and fulsome interview with the creator of the show has almost been completely ignored and forgotten.

You are quite happy to have people appreciating The Prisoner?
Oh, of course. yes. And I think that they've done, and that they still do, some terrific things. they are a very talented group of people. I don't know if you've seen any of their publications that they put out, but it's professional stuff.
You do see it then?
Well, they send it to me.
You do look at it?
Sure!
Do you get a buzz out of reading about the programme?
Not really, no.

It's a great interview, but because of his refusal to court popularity McGoohan's words have been read by seemingly very few. The line of the fan clubs seems to have always been that their Number Six is a taciturn hero and therefore McGoohan had to be so portrayed too. Anyhow, my Blog this time isn't really meant to go on too much about this, but rather to complement my previous Blog. In that Blog I referred to contemporary echoes of The Prisoner since the programme was made. In this Blog I would refer the reader to the echoes from the even earlier past, that perhaps informed McGoohan, as he created The Prisoner with his collaborators. However, before I move onto those echoes specifically, I'd just like to reference a couple more exchanges from The Box interview.

Did you read any Herman Hesse?
No, I don't read that much really, of that sort of stuff. I read biographies......

Jung? I haven't read a word, not one word.

I don't want you to get the impression I am mocking this interview; it's criminally ignored by the prisoner classes, but there we are, people read what they want to read I guess, or what they get the chance to read. The purpose of this Blog is the clue Patrick McGoohan gave to something he would possibly have waxed far more eloquently about.... Biographies.... Himself for instance. If the Prisoner fan took more interest in him, the Prisoner fan might find he had something far more intriguing to reflect back at them.

My last Blog utilised the recent work of Adam Curtis to reflect how The Prisoner had resonated in real life over the forty years since it's realisation. The thirty years before The Prisoner had been resonating their own real life and Patrick McGoohan had been there to soak it up. The McCarthy campaign, and the HUAC hearings that had preceeded them by a few years, are often referenced as a resonance in the mind games of the show. Here are a few characters who knew more than most about the perils of being unmutual in the global village of the 1950's. 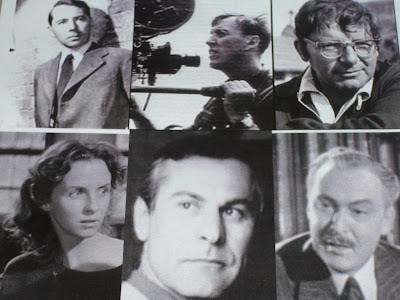 Alexander Knox
In 1944, he was chosen by Darryl F. Zanuck to star in Wilson, the biographical film about Woodrow Wilson, for which he was nominated for the Academy Award for Best Actor. However, during the McCarthy Era, he was blacklisted by the Hollywood movie studio bosses and he returned to England. In 1952 Patrick McGoohan spent two weeks in a theatre tour with Knox and of course was a support to Knox's star in High Tide at Noon.

Joseph Losey
During the McCarthy Era, Losey was investigated for his supposed ties with the Communist Party and was blacklisted by the Hollywood movie studio bosses. His career in shambles, he moved to London, where he continued working as a director. Even in the UK, he experienced problems: his first British film, The Sleeping Tiger, a 1954 film noir crime thriller, bore the pseudonym Victor Hanbury, rather than his own name, in the credits as director. Joseph Losey was the director of McGoohans third Rank film, in 1958.

Cy Endfield
In 1951 Endfield was named as a Communist at a HUAC hearing. Blacklisted by the movie studio bosses, he was unable to get work in Hollywood and moved to Britain where he wrote and directed films under various pseudonyms, often starring fellow blacklistees. In 1958, Endfield was nominated for a BAFTA Award for Best British Screenplay for Hell Drivers. Enough said, probably.

Sam Wanamaker
In 1951, Wanamaker made a speech welcoming the return of two of the Hollywood Ten. In 1952 at the height of the McCarthy "Red Scare" period, despite his distinguished service in the U.S. Army during World War II, Wanamaker learned that he had become blacklisted by the House Un-American Activities Committee (HUAAC), which he discovered while filming Mr. Denning Drives North in the UK. Wanamaker consequently decided not to return to the United States. Instead, he re-established his career in England, as actor on stage and screen, director and producer. Sam Wanamaker was the theatre director of one of of Joan McGoohan's main West End stage roles and of course later worked with Patrick McGoohan himself on Danger Man.

Albert Dekker
Left-leaning box-office stars such as Edward G Robinson, James Cagney and Gregory Peck benefited from studio protection, while character players such as Anne Revere and Albert Dekker, among many others, had to take long holidays. In Hollywood as everywhere else, rank has its privileges. http://www.productmagazine.co.uk/index.php/film/P1/
Patrick McGoohan worked with Albert Dekker in one of his formative TV roles from 1955, All My Sons.

The woman in the group is Betsy Blair
After work in the theatre, Blair began her film career playing supporting roles in films such as A Double Life (1947) and Another Part of the Forest (1948). Her interest in Marxism led to an investigation by the House Un-American Activities Committee and Blair was blacklisted for some time, but resumed her career with a critically acclaimed performance in Marty (1955), winning a BAFTA Award and a nomination for an Academy Award for Best Supporting Actress. Betsy Blair played the wife of Patrick McGoohan's character in his 1962 movie, All Night Long.

Biographies? Did Patrick McGoohan need to read them in these cases? Not really, he knew and associated with these people, who were caught up in exactly the sort of subtle attacks on individual thinking that The Prisoner railed against in its meanderingly allegorical way. Patrick McGoohan once said that the Prisoner was associated with something that had been in his own head, all his life. As I've said before in these Blogs, to guess what might be in a man's head, it always pays to take the time and trouble to find out what has gone into that head as it lived a life - a life that segued from the real life of intranational Cold war politics as they affected actors in the free West to the fictional life of a secret agent battling the forces of oppression in the East - on behalf of the Internationalist NATO. Was Patrick McGoohan personally interested in Politics - with a capital P - ? His 1990 interview suggests not, "People who jump on those bandwagons have got to have a bandwagon to jump on to, so they'll do it anyway. If its not Ban the Bomb, it'll be something else." As an actor at that time however, he would have naturally been a keen observer of people and the under-currents of those people and what made them who they were, and as he remarked later in that 1991 interview: