McGoohan on my mind: Episode 18 – The Angry Outsider

Any brief browse of the Internet or published books will find “The Prisoner” and “Existentialism” referenced together. http://www.museum.tv/archives/etv/P/htmlP/prisonerthe/prisonerthe.htm
It was ten years or so after the original broadcasts that Prisoner fans first began to study the series and during the course of Patrick McGoohan’s first major interview on the subject, it was evident that the underlying themes of the show were subject to intellectual exploration.

Troyer: What is your response to all the analysis and all the philosophising and criticism of the series? People have tried to make so much of it and to find so many levels of meaning, to parse it in so many directions.
McGoohan: I'm astonished! For instance, the beautiful presentation, the thing that you prepared for our good friends here, puts profounder meaning into many of the stories than I ever thought of.
Troyer: (Chuckling) Or more pompous?
McGoohan: (Automatically) Yeah. (Troyer chuckles again.)
McGoohan: No! Oh, no, not at all. No, no. I think it's marvellous; I'm most gratified.
http://www.difference-engine.co.uk/library/mcgoohan.html

I began this Blogroll in order to create a place to reflect and refute many of the cult-myths that have been built up by elements of the fan-base of The Prisoner over the years, since serious organised reflection upon it began around 1976. That isn’t to decry such reflection, but some of their conclusions from the series progression have been downright daffy. Sometimes these erroneous notions have developed, I think, because the students of the show and its origins have operated out of time. That is to say, they look back from the 1980’s and 1990’s at a show made in the 1960’s by men who were largely formed as personalities by the 1940’s and 1950’s. The cross-currents of the show’s past and the critiques of the varying present have often led to misunderstanding and subsequent confusion.

Since about 2002, I carried out amateur research on Patrick McGoohan’s career in Britain and my main area of interest at that time lay in his ten year theatrical career, that culminated in the famed production of Brand, in 1959. This study opened up the somewhat forgotten world of the British Repertory Theatre scene in Britain, that began to be killed off when television became more and available after 1955 – when commercial television began. In some of my earlier blogs I have suggested how McGoohan’s acting past fed into his eventual creation of The Prisoner – aspects of characters and plots from his many TV and movie roles in the years prior to 1966. The hugely varied roles he played in theatre no doubt also gave him a solid bed-rock of ideas. However, there is one particular aspect, related to the theatre, that I have only recently come to realise may have been either a direct influence upon his developing ideas, or at least go to demonstrate the zeitgeist that his philosophies derived from. None of this means anything of course. Every individual is the result of their own environment. That could be said to be an existentialist point of view.
Existentialism: Branch of philosophy based on the situation of the individual in an absurd or meaningless universe where humans have free will. Existentialists argue that people are responsible for and the sole judge of their actions as they affect others. All self-aware individuals can grasp or intuit their own existence and freedom, and individuals must not allow their choices to be constrained by anything – not even reason or morality. This freedom to choose leads to the notion of nonbeing, or nothingness, which can provoke angst or dread. Existentialism has many variants.

Prisoner fans have long been curious about the evident mild anti-intellectualism that McGoohan exhibited. In 1991, one of them quizzed him directly about the sources of his philosophical outlooks that permeated The Prisoner. 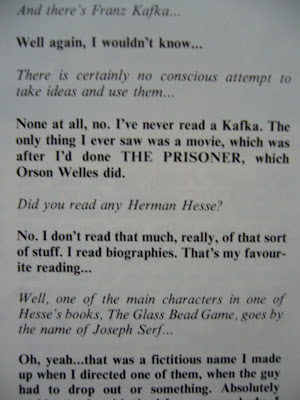 Just as he had, back in 1977, so in 1991 did McGoohan give no suggestion that he had derived his ideas from anywhere in particular. This conundrum has long exercised prisoner fan-thought and the most recent dvd releases have even included extras endeavouring to resolve the perceived "mystery".

There are many views expressed in "Don't Knock Yourself Out" the 90-minute retrospective included in the new Blu-ray edition of the classic 1967 British TV series The Prisoner, in stores Tuesday. But the majority opinion seems to be that its creator and star, Patrick McGoohan, lost his grip on the show over the course of its 17-episode run. The Prisoner has maintained a hold on the public imagination for more than 40 years. "Quite simply, there's never been anything like it," says the narrator, a statement that is hardly simple, skirting as it does the question of whether the show was a brilliant idea or a lucky fluke. http://www.nationalpost.com/opinion/columnists/story.html?id=92a66d0b-d72d-4aeb-8b13-5350ef8dc4bf

The present Fan Babylon continues to miss a simple way to understand how men like Patrick McGoohan could develop their philosophies without having to rely on any particular school of thought from outside of themselves. Was the show a brilliant idea or a lucky fluke? One part of the answer could lie in the events of 1956.

Angry young men was the catch-all name applied by the popular press to a group of novelists, poets, playwrights, and philosophers. The group was unusual in that the major figures had small respect for each other's work and almost never met. The figure of the AYM, as he was also known, proved a potent one for Fleet Street editors and theatre audiences after the seven years of austerity that followed the Second World War.
Paraphrased from http://www.oxforddnb.com/public/themes/95/95563-content.html

The ‘angry young men’ most famously are credited with transforming British theatre, with John Osbourne’s Look Back in Anger being the major theatrical work that launched the phenomenon into the public sphere. Patrick McGoohan, about to spend two years as a Rank movie-star in 1956, could not have failed to be interested in this ground-swell in the world of theatre that he was about to take a sabbatical from. However, the influence of the AYM was not just theatrical. Some while ago I was reading a book by Peter Hennesy: Having it so Good – Britain in the Fifties and came across a mention of someone I had never heard of: "Colin Wilson’s The Outsider, the cult book of 1956 swept the market……. The Outsider was not and is not, an easy read… Quite why the Sunday Times reviewed this book as “one of the most remarkable books I have read in a long time” is difficult to fathom [in 2006] but they did… suggesting that beneath the impulse to savour the fashionable book of the hour lay a confused fluidity of the beliefs into which Wilson tapped…… Wilson’s sudden fame had much to do with the random coincidence that suddenly “The Outsider” and “Look Back in Anger” had appeared in the same week. That was all the press needed to start talking about it….. The Daily Express ran a series on ‘Angry Young Men’. Wilson needed the money and wrote for it.”

So what? I can almost hear my blog-reader saying….. Patrick McGoohan never publicly recalled reading this book! However, Colin Wilson and The Outsider were evidently rampant in the media of the day and many other writers were writing about his book. One of them was Kingsley Amis – himself one of the Angry Young Men – and when I read his review of The Outsider from 1956, I could not help but make the connection between the philosophy of Colin Wilson, in 1956 and the philosophy of a contemporary of his, who made a television series exactly ten years later.

The Spectator – Kingsley Amis - 1956
“Here they come, tramp, tramp, tramp – all those characters you thought were discredited, or had never read, or had never heard of: Barbusse, Sartre, Camus, Kirkegaard, Nietzsche, Hermann Hesse, Hemingway, Van Gogh, Nijinsky, Tolstoy, Dostoevsky, George Fox, Blake, Sri Ramakrishna, George Gurdjieff, TE Hulme and a large number of bit players. With admirable clarity and unpretentiousness, Mr. Colin Wilson shows that all his legionnaires, miscellaneous as they may seem, were animated by the same kind of distress and took up similar attitudes to it. The Outsider – their collective label – is the man who has awakened to the chaos of existence, to the unreality of what the literal-minded take to be reality. He does not accept the conditions of human life, and finds release from its prison only in moments of terror or ecstasy. He tries to solve the problem of his identity, to discover which of his many ‘I’’s is his true ‘I’………” 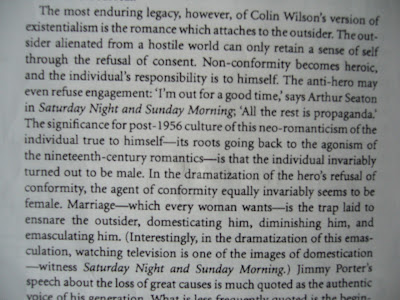 Joan McGoohan enjoyed a laugh at the notion that, in a sense, No. 6 never left 'the village.' 'He would get up at the crack of dawn, get the New York Times, and get some coffee at Mort's or Starbucks,' she said.
http://www.palisadespost.com/content/index.cfm?Story_ID=4587

I should mention that I am no Wilson disciple, I have never even read this book myself and quite honestly I don't plan to either..... Colin Wilson is a very prolific writer. http://colinwilsonworld.co.uk/default.aspx One writer who has studied his philosophising has remarked:"Meaning, according to Wilson, can only be perceived when consciousness is activated by an intentional assertion of will. Defeatist and nihilistic philosophy destroys man's sense of purpose in life, leaving him in a stagnant position. Man, without purpose, sinks to the level of Samuel Beckett's characters, incapable of action because nothing is worth doing."

Or, to put it another way:

".......... if people form a group it should be to celebrate the individual. The Prisoner follows the individuals struggle with the bureaucratic tensions and restrictions of society, an individual who says " I am myself and you have no right to know my intimate thoughts, you are trying to learn my intimate thoughts and I will do everything that is possible so that you do not reach them ! " Ha! Ha! ......... People are not all the same they live by different rules, so if this helps them be happy... bliss, the trick is to have the power to make a choice. "
http://groups.google.co.uk/group/colony3/web/le-prisonnier-au-cinema---translated-from-the-french?hl=en

There were only seventeen episodes of The Prisoner.

This my 18th piece of blog paper.
There's moor to this than meets the I.
Posted by Moor Larkin at 18:22 4 comments: Links to this post