McGoohan – Where am I? – I know there are places where these people are kept. Not voluntarily, and in absolute luxury. There are three in this country

In June 1968, five months after The Prisoner had completed it’s first run in Britain, it was to commence it’s much-anticipated first showing in the USA. It was billed as front-page news on the USA TV Guide: “Patrick McGoohan’s puzzling, intriguing new summer series … Page 22” and the four page interview with Joan Barthel included the equally intriguing claim by McGoohan that his new series, although billed as enigmatic, had at its base a premise that was not all that far-fetched. The country he was referring to, in this interview was, of course, the US. Which three places did he mean? Nobody asked and so nobody answered.

One of the enjoyable things I’ve been doing recently is taking a break from pontificating in my own Blog, and instead reading other people’s Blogs, with related interests to my own. Often the other Blogs have come at a subject from a totally different direction to mine, yet they correspond at a particular point, before zooming off again on their own subjective trajectory. One such was about the famous Peanuts cartoons, enormously popular throughout the Sixties and Seventies especially. What possible connection could there be between Schulz and McGoohan? This one?: 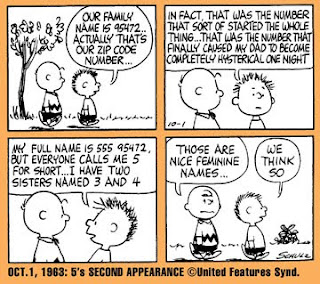 The blogger explains what this was all about:
The numerically-named siblings were Charles Schulz’s commentary on the ever-increasing use of numbers to identify individuals, from Social Security to zip codes to expanded phone numbers. http://tglob.blogspot.com/2007/10/peanuts-mystery-solved.html
I have no particular reason to think that Patrick McGoohan ever saw this cartoon, but his own feelings about numeralisation were evidentially not only his. Schulz was of the same generation and lived through the same times. McGoohan once commented modestly that his prisoner show was a mere speck of sand in the desert, and we neatly see another speck here, cast by an American man who could draw and make up stories.

Another Blogger I coincided with, had a much more direct linkage with my subject matter. In fact, when I recently came across this particular Blog, I found I was actually rediscovering it, because I had added a small comment back in November last year!!– And promptly forgotten about it again. However, my recent active interest in “places where these people are kept” has led me back and I found the Blog had been exploring much of the same territory I had, with Man on A String;

Via Colony Three - to the Villagehttp://spywise.blogspot.com/2009_06_28_archive.html
For very different reasons, the author has found himself in a similar place to that of myself. I’ll let you read his own blog for yourself, but one conclusion he comes to is moot: “….. a historian at the CIA…… wrote me there are no records of any such training towns”
By this statement, the Blogger indicates that there was no real-life inspiration behind either Colony 3 or the Village. However, the Blogger was really looking for the wrong sources. The idea that scriptwriters or Script Editors would have access to hot or cold war secrets is fairly absurd anyway, especially considering the political conditions of the mid-1960’s. However, scriptwriters would naturally be avid readers, and actors avid watchers. McGoohan would inevitably have carried ideas from the newspapers, of which he was also known to be an avid reader, so whether spy training camps really existed is immaterial to their existence in dramatic fiction because they were as plain as day in the press. This article is from 1961. 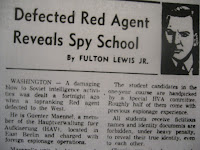 There is of course more than one type of camp. The Butlins Holiday Camp was a post-war phenomenon in Britain. There are a few 1960's postcards of just one within the weblink.
http://www.postcardnostalgia.co.uk/north_wales/pwllheli/butlins.htm
Aspects of McGoohan's village inherently echo the organised bonhomie of this British institution, but was it mere irony and coincidence that the Village announcements were made through those ubiquitous loud-speakers, advising villagers of 'todays activities? Just as at Butlins? Whereas Patrick Mcgoohan never went to Inverlair there is proof that he was personally familiar with the Butlins camp at Pwllheli. just a few miles from Portmeirion.

This production-still from The Prisoner always makes me think that these three strangely garbed ladies were on day-release from the Star Trek studio. In fact their presence has a special intrigue.

They were in fact a little cabaret act called The Candy Sisters. They were known for doing an act where they sang songs in German, French, Italian and Danish... (maybe others for all I know - Polish and Czech would be cool). I thought this was intriguing, given the cosmopolitan ethos that the Village is given right from the taxi-driver upwards. I'm guessing those odd outfits are their own costumes from their Act.

Even more intriguing is the fact that they were appearing at Butlins Pwllehi and were personally asked to come over for filming by Patrick McGoohan himself. The Candy Sisters were apparently chauffered from Pwellhi to Portmeirion by Everyman car each day they were involved in filming and returned to Butlins each evening, in good time to perform their 40-minute spots for the 1966 season's happy campers. When this turn of events was reported it was mentioned that the girls excitedly recalled having *close-ups* with the star.

Holiday Camps were of course primarily a family place and there's a nice nostalgic glance at the British Holiday Camp phenomenon in its 1966 heyday here.
http://www.bbc.co.uk/wales/northwest/sites/pwllheli/pages/butlins_archive.shtml 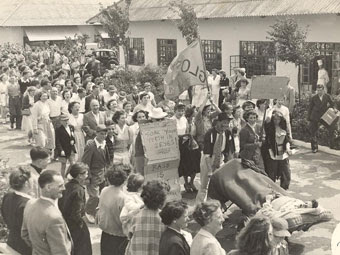 You'll perhaps spot a few village tropes amongst the footage. In the Holiday Camp it was all about the group having fun - no place for the isolated individual!

These are just some of the influences that are easy to see within the growing format of The Prisoner but these are hardly the three places Patrick McGoohan could have been referring to, to his American interviewer. When he said "I know there are places where these people are kept. Not voluntarily, and in absolute luxury." one of the places he was referring to was assuredly relating back to one of the most famous incidents of the Cold War - an incident that began in 1960, as McGoohan first found fame as a secret agent, and the repercussions of which were still resounding in the later Sixties, as he completed his time with World Travel before resigning himself to life in the village. Remarkably that most famous event reverberates through several scripts of The Prisoner too, with their inclusions of downed espionage pilots.

The U2 Incident occurred in 1960 but perhaps the most intriguing aspect of the case was exposed two years later, when a prisoner was released, only to be immediately placed into luxurious imprisonment.

Powers had cooperated with his Soviet captors to the point of revealing the name of the unit commander who had given him his orders; he admitted making previous flights along the Russian border, and acknowledged at his Moscow trial that as an aerial agent he had performed "very ill service." Had Powers been brainwashed? Why had he not fired the charges that would have destroyed his plane? How high was he flying when hit—and what had hit him? Was it, as Khrushchev claimed, a Russian rocket at 68,000 ft.? Or did he have a flameout?

To confront Powers with these questions, the press staged a manhunt of its own. The trail was picked up near Easton, Md., by an Associated Press stringer named Mary Swain, who had a hunch that Powers might be in a nearby estate called Ashford Farms that the Government had bought some years ago and used for mysterious purposes. Armed with binoculars, she set up a vigil in a lane adjoining the farm, noted a great coming and going of cars. One night, a blue station wagon carrying six men sped out of the gate and down the road toward Dover Air Force Base in Delaware. Mary Swain gamely followed for a few miles, but lost sight of the car. Later, the Department of State said that Powers had been at Ashford Farms but had been spirited away.http://www.time.com/time/magazine/article/0,9171,895886,00.html#ixzz0vCvptJb0
Everyone knows that when an aeroplane passes through the sound barrier , as the U2 would, that there is a sonic boom - the sound of a thunderclap !
PART TWO soon, with the American twin of Inverlair but this time unambigous and in the newspapers of 1962. Plus the mystery that is, or was, Graczyna - a Spy training Town in the newspapers of 1965 and maybe even a reminder that X marked the spot for Ian Fleming himself. Be seeing you.
Posted by Moor Larkin at 21:28 5 comments: Links to this post