From the mind of McGoohan: "John Drake of 'Secret Agent' is gone, but we're not foolish enough to try to change the image we have established with TV"

The title of this Blog is a quote from within an interview given to American Robert Musel by Patrick McGoohan, in 1966, an interview quoted in another context here:
http://numbersixwasinnocent.blogspot.com/2009/09/mcgoohan-on-my-mind-number-of-beast-or.html

In McGoohan's British homeland, a year or so later this concept was expressed in another way,
"When he went into Danger Man, he did so because he wanted to prove that television thrillers could have integrity. This time, his aim is to demonstrate that they can contain food for thought as well."
http://www.danger-man.co.uk/docs/magazines/tvtimes/Sept1967/pdf.pdf

As any reader of much of my Blog will be well aware, I have rebutted in differing ways, many of the myths and legends propagated by erroneous "fan theory" over the last thirty years. I have utilised documentary evidence from contemporary sources that demonstrate that much of the fan history is post-datal-rationalisations based on almost no verifiable evidence. Instead of good historical study they have often created some kind of strange melange between the nature of the fictional show and the real-life inspirations of the man behind that show, Patrick McGoohan. As McGoohan himself once ruminated in 'The Box' magazine, in 1990,
"... it's a step into cultism. In the end it's got nothing to do with the subject - it's become a sort of entity to itself."

This form of fan fantasy mixing with fact is to be explored artistically in Manchester soon:
http://fictionmaker.blogspot.com/2010/06/everyman-patrick-mcgoohan-story.html
but it is comforting to read that the author is neither kidding himself, nor attempting to confuse anyone else:
“In keeping with McGoohan’s surreal work on ‘The Prisoner’, I shall be playing around with time, as well as the character itself. ‘Patrick McGoohan’ will be a mix of the real man, and ‘No.6’ (from ‘The Prisoner’).”
As mentioned several times throughout my Blogs, one of the more pernicious mixings of fact and fiction in Prisoner fandom has resided in how the series itself became *imagined*. The speculation of origins range from the ridiculous - an obscure hunting lodge in Inverlair, Scotland to the very sublime connectivity of Danger Man.

Patrick McGoohan made it very clear, in 1966, to Robert Musel that he was using the familiar milieu of the Secret Agent in order to craft a thriller that contained much food for thought. In creating this segue from Danger Man to The Prisoner, I once described Patrick McGoohan's creativity as "standing on his own shoulders". However it is also clear from his objective references to his old character that Patrick McGoohan was consciously pursuing no *sequel* to the adventures of John Drake, but continuing to use the allegory of reel life to allow his audience to reimagine their own real life.

I recently watched an absurd video-recording of an ex-cast member of the The Prisoner, spreaking at an event celebrating that programme's 35th Anniversary. The speaker waffled at some length about why the characters in The Prisoner were numbers. As with many such speakers and their long-winded speculations about the inspirations behind The Prisoner, they soon tipped into absurdity - with references to the tragedy of prisoners of war being numbered - this connection being grasped at to try and make further connections in the viewers mind with the embroidery of fan-fantasies about WW2 and Inverlair. These *connections* are all pursued in an increasingly tight spiral of imaginary causal effect that subverts the interested historian from the reality of the past of this television show.

It is an obvious fact that prisoners in jail have always been allocated a number, so the idea of numbers and prisoners hardly requires much thought. However, besides this everyday logic... there is an evidential *TV secret agent* connection with the wearing of numbered badges - now regarded as so typical of The Prisoner. It came from a show that, between 1964 and 1967, was so enormously popular all around the world that it spawned a mass market in toy merchandise. 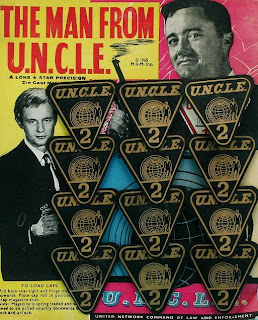 In the video tagged below, you can see *secret agents* leaving the plain streets of Brooklyn and entering their modernistic underground base and being issued with numerical badges. Napoleon Solo was Number 11, Illya Kuryakin was Number 2 and of course UNCLE had an obvious Number 1. He was Mr. Waverley - from Section One. 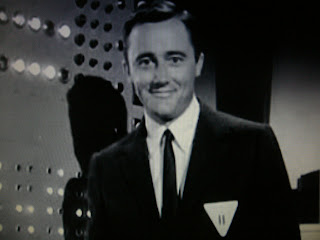 Though executive producer Norman Felton and Ian Fleming had developed the character of Napoleon Solo, it was producer Sam Rolfe who created the organization of U.N.C.L.E. Unlike the nationalistic organizations of the CIA and James Bond's MI6, U.N.C.L.E. was a worldwide organization composed of agents from all corners of the globe. The character of Illya Kuryakin was created by Rolfe as a Russian U.N.C.L.E. agent............. Rolfe created a kind of Alice in Wonderland world, where mundane everyday life would intermittently intersect with the looking-glass fantasy of international espionage which lay just beyond............. The series also began to dabble in science fiction-based plots, beginning with "The Double Affair" in which a THRUSH agent, made to look like Solo through plastic surgery, infiltrates a secret U.N.C.L.E. facility http://en.wikipedia.org/wiki/The_Man_from_U.N.C.L.E.
The cross-fertilisation between Danger Man, UNCLE and back to The Prisoner is apparent but has been little recognised due to the vast bulk of Prisoner *research* emanating from the UK by those too young to remember the ubiquitous popularity of The Man from Uncle at the time The Prisoner was made. Strangely, for such an enormously popular show UNCLE was not released into video in the years since, nor re-run on TV very often and so has remained unseen and mostly un-remembered since. The episode of The Prisoner called "The Girl Who Was Death" was not dissimilar to the tone of Uncle (a show which increasingly adopted a *tongue-in-cheek approach in it's later seasons).
How did the interlaced histories of James Bond, John Drake and Napoleon Solo become resolved by Patrick McGoohan into the figure of a Number Six imprisoned in a strange self-contained village? The solution perhaps lies in a comment McGoohan made in 1965:
"You know? I fear by AD2000 we'll all have numbers, no names."
http://www.danger-man.co.uk/docs/magazines/tvtimes/Oct1965/pdf.pdf
Patrick McGoohan left John Drake, Napoleon Solo and all the rest behind, as he stood upon his own creative shoulders to see that little bit further, as he endeavoured to demonstrate that television thrillers could contain food for thought.

I hope my blog gives the reader pause for thought when reading/absorbing the *Official* stories about the origins and possible reasons why The Prisoner took some of the directions it did. Accept no substitutes. A little arrogance is sometimes a healthy thing to have.... so long as you temper it with a little humility.

Posted by Moor Larkin at 13:33 6 comments: Links to this post