McGoohan from his own lips: "The network must let us know by March 11 if it wants additional episodes. If so, we will continue to film, but in color. But, if not, we won't do another season in England."

In a Blog last September I made the point that Patrick McGoohan had long directly contradicted a central tenet of Prisoner fan-lore and that was that he, as an actor, suddenly resigned from a putative fourth series of Danger Man, and this sudden resignation was somehow replicated in the way Number Six opens the action in The Prisoner by suddenly and violently resigning.
http://numbersixwasinnocent.blogspot.co.uk/2011/09/mcgoohan-in-his-own-terms-i-didnt.html

Like much else of the entirely false history created about the genesis of The Prisoner, this resignation fable rested largely on the fan-club statements made by George Markstein in the late 70's/early 1980's:

McGoohan quit! He got fed up. We all thought the series would go on. It was very successful, it had gone into colour, it was showing in America, but the pressure was enormous - a series turnaround puts an incredible strain on an actor and I can quite understand that he'd had enough - and he gave it up.
http://www.the-prisoner-6.freeserve.co.uk/markstein.htm

The statement by Patrick McGoohan that heads this Blog is actually from an American newspaper dated January 14, 1966. It is clear from this that far from quitting, McGoohan was as much a victim of TV destiny at the time as anyone else was. Several of my Blogs over the course of this Roll have referred to American newspaper material and to how actual contemporary facts constantly prove the "established production histories" of The Prisoner to be entirely wrong in their conclusions. It is obvious to anyone who has perused a smattering of my Blogs that much of this erroneous writing stems from the gullibility of writers about the various statements made in the past by George Markstein and promoted by his indirect fan-club. Nevertheless it is inevitable that when "published history" is challenged by a mere "Blog", there is largely a conspiracy of silence about it and a refusal to accept that most books on the subject require a major rewrite.

It is also a fact that most recent publications on the subject originate from British sources and not unexpectedly British sources tend to be a bit sniffy about taking notice of 'foreign' information, especially when it comes from America. I once had an enjoyable forum conversation with a web-id named Ignis Fatuus who long contended that the US market had no relevance to the making of shows such as Danger Man. This sort of chauvinism is fairly common in the tight circles of those interested in Archive TV. It is a small speciality and naturally people in it like the idea of a small world. As an internet-based writer, I am of course only too open to the broader influences and information available from the world-wide web. However, the nicest way to beard a bear can be to beat him up in his own den, so I was especially delighted when I turned up some British information that completely confirms all that I have contended on this matter. This clipping comes from the British Kine Weekly of March 1966, nine days before McGoohan's stated deadline of March 11. 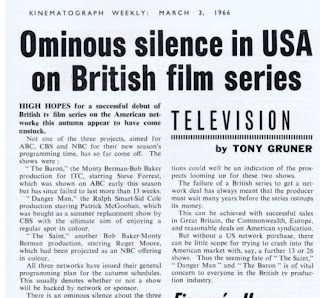 Read almost any published source on the subject of the segue between Danger Man and The Prisoner and you will read that there was a fourth series, going into colour, and that this series was aborted by the pre-emptive resignation from the role of John Drake, by Patrick McGoohan. Every time you read that in future, you can now know that the story is completely untrue. There would be no fourth series of Danger Man because the Americans were not interested. There would also be no fourth series because McGoohan had said so, but far from any sudden resignation by him, it had been publicly stated by him since January of 1966, that no new series of Danger Man would be made if CBS did not renew it's option.

There is a further controversy about the colour filming that did take place for Danger Man. Patrick McGoohan long stated that he agreed to make the film Koroshi to satisfy Lew Grade and give him something to sell. but McGoohan was canny enough to recognise that this would also give him and his closer colleagues the chance to gain some hands-on experience of filming in colour, before embarking on The Prisoner. His statement has long been dismissed in Prisoner interest circles as just his own post-hoc self-aggrandisement, and the myth is maintained in published works that Koroshi was a film hurriedly cobbled together out of two episodes of a *new* colour series that was unexpectedly abandoned. Once again, with access to original material from the time, in this case a copy of Daily Cinema from April 1, 1966 it is evident that whilst there is still confusion in the journal about exactly what was going on, it is clear enough that Koroshi was conceived as a two-hour project. 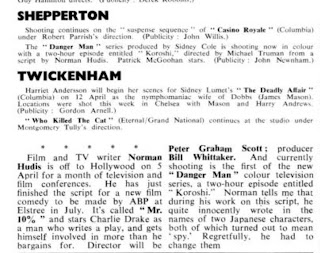 What becomes most apparent from all this, is that a keystone of prisoner fan-lore is entirely wrong. There was no sudden resignation on a whim by Patrick McGoohan, the script editor claiming this seems to have either made the whole thing up or, probably more likely, to have had absolutely no idea about what was going on at the time. Whilst often cast as a co-creator of The Prisoner by fans, in the years since, George Markstein was not even in the loop about the fate of Danger Man and the creation of The Prisoner. Many other myths about the latter show have emanated from fables told by Mr. Markstein and promulgated by the fan-club he influenced. Whilst McGoohan had some important supporting relationships when embarking upon the Prisoner project, which was actually commissioned on April 16, 1966, one of them was certainly not his erstwhile script editor.
http://numbersixwasinnocent.blogspot.co.uk/2010/04/mcgoohan-in-his-own-words-it-is-another.html


Still on the subject of Koroshi and to emphasise how this small ITC colour project was never a part of any "fourth series": This film was evidentially never made as part of any American deal with CBS, because when it was eventually shown as a movie in the USA, it was broadcast by CBS's hated rival NBC. Lew Grade didn't mind who he sold his shows to, but there is no way CBS would have funded Koroshi and then allowed NBC to broadcast it, and Patrick Mcgoohan had long stated that without US commitment there would be no colour series of Danger Man. It's a sort of circularity, but it all holds together.

Moor next time. The truth is never a burden, it just goes for a burton - from time to time.
This Blog would have been impossible without my friendly neighbourhood Sheriff. Howdy pardner.
Posted by Moor Larkin at 23:11 13 comments: Links to this post