McGoohan from his own Quotes: Part of that fight is to keep from being subtly brain-washed and lulled into accepting dissipated truths, total untruths. Accept nothing. Look into it yourself.

In 1970, Patrick McGoohan was two years down his own road from the show he had finished in the early months of 1968, called The Prisoner. To read some recent attempts at biography of McGoohan the reader gets the impression of a man in full flight either from overwork, himself, County Council Planners or perhaps the great British public!  In fact, he was doing none of the above. As my earlier Blogs have highlighted, he had said from the beginning that The Prisoner would be his last TV project for the foreseeable future, and by the time 1966 changed to 1967 he had established that 17 episodes would be the number agreed with CBS, upon whom much of Lew Grade’s financial logic relied. Patrick McGoohan's energies were undiminished after completion of his Everyman project however, and interviews with him by American pressmen in Hollywood in 1969 and 1970 speak eloquently of his unabated enthusiasms. 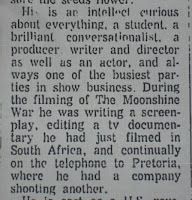 What is quite bizarre is how these facts of history have been rewritten in published books, in the decades since 1970. One official book has this passage:

“McGoohan left England for Switzerland, making light of his decision to emigrate…The truth is rather more complex. At the time of it’s premiere, The Prisoner was a commercial and critical failure, which must have come as a considerable blow to his confidence after the runaway success of Danger Man…”

The Truth? To paraphrase Jack Nicholson, some experts have no idea of the truth. It is clear from the comment in the “Hollywood Special” below, that The Prisoner was a huge success at the time, and highly-regarded in the USA, just as it had been in the UK, Canada, Japan, Germany, France and the various Latino countries where McGoohan had gained popularity in these years of the 1960’s.

The reason the so-called experts prate this kind of utter tosh seems to be because they follow the line adopted by the cult fans of McGoohan’s show. As I have suggested in previous blogs, it seems that in order to give themselves some kind of ownership of the show, these 'experts' disassembled actual history in order to create the illusion that they had somehow rediscovered and almost re-invented the show themselves, ten years later. They then educated others about what a great show it really was. This delusion has then percolated into the consciousness of real history. Not content with the talking about the programmes they also reinvented the actuality of how the show was created. They pressed the then novitiate Script Editor into the primary creative source and then relegated Patrick McGoohan into some kind of pirate who tried to steal the show. The official book quoted earlier also contains this line, when referring to McGoohan’s role in the “commercial and creative failure”

“He had presented himself as (and in the end became) the series’ driving force… These words returned to haunt him following the adverse reaction to the series. After a charmed rise to fame, he may have felt that the show’s perceived failure damaged his credibility as an artist in England”

This sort of shockingly untrue record of events seems to have almost taken over in official or published works about the making of The Prisoner nowadays. The actuality of what was motivating McGoohan, always had motivated him, and would continue to motivate him, is set out in his own words, in the same contemporary article from 1970:

Two years after The Prisoner had become one of his past projects, Patrick McGoohan was not being haunted by anything. He was working hard as ever, and was involved in a number of ongoing projects. The sort of insultingly untrue things being written about him in the first decade of the 21st century meshed with the kind of thing the fans had generated about him in the final decade of the 20th Century. In 1990 the UK cult was also generating intellectual treatises, mirroring the Canadian College courses that had existed back in 1977, culminating in McGoohan’s personal interview by Warner Troyer for CBC. By 1990, a decade and more on, this footnote appears in a paper in the “Media & Society Series”

“Mike Gold reports that McGoohan originally wanted to do a seven-part serial but Lew Grade wanted 26 episodes so that he could sell them on a package deal to CBS on a first season basis. They compromised on 17 episodes, McGoohan adding the additional ten plots over one weekend. However Gold’s information appears dependent upon later myths about the series built up by McGoohan in his later presentations before North American college students”

There it is, the unambiguous allegation that Patrick McGoohan was not a man to be trusted. This is not something the academic author has come up with on his own, he is continually refrerencing *experts* in the story of the prisoner show. The fans were of course labouring under the delusion that everyone wants to be famous – the celebrity culture that so infuses the modern Western world. As McGoohan’s quote in the afore-mentioned article makes plain, fame was never his spur. I am reminded of a quote from one personal friend of Patrick McGoohan : Paul Eddington. Back in 1968 he commented about his old friend from Sheffield:

“The trouble with talking about Pat is that one is apt to sound so pious because he is the sort of person one can so easily admire. He has so many admirable traits to his character. He is, in every sense, a good man”

A Good Man and True perhaps, as opposed to a good man who makes myths up. Strangely enough, the references to McGoohan’s ongoing projects in South Africa two years after The Prisoner involved Kenneth Griffith, whom McGoohan seemed to have financially enabled to change career path from being a reputable character actor, into a Documentary Producer. Mr. Griffith became a regular guest of Prisoner fan conventions over the years, and became one of their sources of wisdom about George Markstein, who he claimed to know so well. In an official companion to The Prisoner there is this quote at the end of a shambolic biograph of Mr. Markstein; it is ascribed to Kenneth Griffith in 2001.

“George Markstein… carried in him the dark vision of Jews and Nazis. I have always been convinced, since the day I first saw The Prisoner, that is where 'I am not a number’ was born”

There is a properly researched biograph of George Markstein three blogs ago, on my Roll, and it is quite evident that not only are the official books writing gibberish, but also their source on this occasion, Mr. Griffith, was also spouting balderdash. It is a known fact about George Markstein that he was somewhat right wing and a quoted believer in the ‘great days’  of the old British Empire. He was the son of a Viennese Jewish émigré certainly, but seemed never to have taken any great interest in his ancestry and continually falsified his own biography. In the ITC Production Notes that were published in 1968, this is the description given about him:

“The Script editor is GEORGE MARKSTEIN, a recruit from journalism. London-born, he began his career on provincial newspapers and then specialised in crime reporting in Liverpool and next in London”

The rest of the blog that initially followed here, proved to be an error in understanding about the contents of the ITC production Notes that were provided to me at the time, and I have accordingly deleted the confusing information I originally posted, and this Blog entry now ends here.

My thanks to the respondent who pointed out my error and assisted me to view the correct materials. I'm Obliged.

Posted by Moor Larkin at 12:40 4 comments: Links to this post