McGoohan in his own Words: "it's a step into cultism.. it's become a sort of entity in itself

When the cult of the prisoner began, around 1976, the fans quickly moved from analysing the meaning of the show to analysing the making of the show. It’s difficult  to discern how much of the original publicity material they had access to back then. I suspect it was not very much. As their interests grew, they relied largely on the memories of various personnel who had been involved in that making of The Prisoner. Perhaps the very first memoir was from Patrick McGoohan himself. This was obtained on teletape in Canada in 1977 and is now known as the Troyer Interview – after the name of the interviewer. A later interview was obtained by the leader of the UK fanbase at that time on soundtape, and that one became known as the Goodman Interview. Patrick McGoohan of course gave many interviews throughout his public career, so it’s only natural that none of them would necessarily be termed the McGoohan Interview. Anyhow, suffice to say that in both those interviews, Patrick McGoohan gave substantially the same story to the interviewer.
As the UK fan-base thirsted for more information however they followed an idea started by fans of Star Trek in the USA and began to hold Conventions. At these affairs they would invite guests – mostly actors or technicians from the production. They would ask them questions and later draw various conclusions from their answers. Some of the key personnel of The Prisoner were beyond their reach however. McGoohan himself was far away, as was Bernie Williams – both having moved to the USA. David Tomblin was busy making movies, whilst Jack Shampan refused to have anything to do with them. Some years later, Ian Rakoff quoted Shampan on the subject: “They keep calling me…… They must be nuts. Liking all that codswallop.” Another key member of the crew, Brendan Stafford seemed to remain utterly unknown to them. I only recently identified him in various Studio set still photographs.
http://numbersixwasinnocent.blogspot.com/2011/02/mcgoohan-in-his-own-words-you-cant-do.html
However there were two groups of people associated with the production who became very available. The actors who played the many minor roles, and perhaps most significantly some of the writers associated with the scripting of the series. In 1979, around the same time the Goodman Interview was made, two writers were interviewed at one of the enthusiastic conventions. One was Lewis Griefer and the other was George Markstein. I’ve never seen a transcript of this interview or a recording of it – available for sale or otherwise. However 1979 seems to have been the year of cult decision. What was said did fortunately filter into the public sphere in 1982 and thus it is now possible to figure out what went on back then. Chris Rodley was evidently fed the information via the Fan Club, Chris Rodley posited an entirely different theory of the creation of The Prisoner than the one previously explained by McGoohan… at least twice. The first thing worthy of notice is that George Markstein seemed to have a somewhat similar view to Jack Shampan about the whole thing.

It might at first seem odd that fans so enamoured of this show should become so enamoured of this critical man, but he had an ace card in his favour. The fans had discovered that this was the same man who had appeared at the start of nearly every episode of the show – as the man to whom Number Six tenders his resignation. Of such arcania are cults built upon and this particular guy told them a story so radically different to the one their previous hero had told them that they simply had to believe in the NEW story – such is the human addiction to the novelty of the unexpected.

If George had been on his own at the time of the interviews in 1979, his claims might have been more discounted. However, he was not alone – he had back-up. Lewis Greifer corroborated him and repeated some of this corroboration to Ian Rakof in 1998:
“Lewis told me about George’s idea, which he hugged to himself for a long time after the war. George had worked on Stars & Stripes, the US Armed Forces Daily. It’s editor had CIA connections……  from these George learned about a secret wartime camp in Scotland. George had written something and then showed it to Pat.
Lewis described Pat as…….. totally instinctual…….. his later talk of the allegory and ideas that elevated the series… had occurred only on reflection – Post Hoc!”
So far as this writers caucus was concerned there were two people responsible for The Prisoner, and it was them !!
One correspondent of mine on the web who actually attended the 1979 interview wrote this to me once:
For starters, I was in the audience at the ICA 30 years ago when it was explained that Markstein was introduced to McGoohan by Lewis Greifer. Greifer stated that "[George Markstein and I] were discussing The Prisoner long before it started. George had worked on the Stars and Stripes and had discovered the existence of these camps where they kept people they didn't want wandering around".
The 1982 article by Chris Rodley makes no mention of Greifer co-creating the show but does expresss it thus

leaving McGoohan with just the role of megalomania.
This was the Big Idea the cult craved. This gave them ownership of their show and they have successfully sold their version of history to the world since. Their most recent version of the story has been published recently, all tangled up in the life-story of their Number Six, who they now find inextricable from a real person and varied actor and performer named Patrick McGoohan. 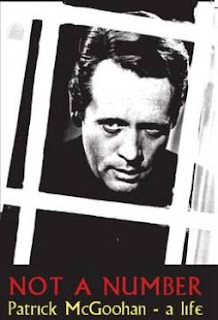 When I saw the cover… I knew I’d seen that picture before, and I was right – Even more amazingly they’re still selling parts of the same story they were selling back in 1982!!

What I find most bizarre is the that the later facts the cultists themselves discovered have never incorporated themselves into their creationist version of events. Facts such as that George Markstein never worked for the newspaper quoted by Greifer and therefore could not have known the editor of it. Facts such as that a British best-selling book mentioning the “secret camp in Scotland” was actually published in England several weeks after McGoohan began work on The Prisoner and this is almost certainly where Markstein first heard of Inverlair. Facts such as that Markstein was no more an ex-Intelligence agent than I am. Facts such as that it was precisely the *double-level* of meanings within The Prisoner that Markstein could neither comprehend or interpret and yet he is credited with that authorship. Simply reflecting upon Greifer's comments about McGoohan's lack of conscious deliberation about what he was doing seems absurd when taking into account that he was refering to the writer of Free For All, Once Upon A Time and Fall Out.
Longer-serving readers of my Blog will know I've been banging on about some of this factual evidence before. But for anyone new reading me…. Be seeing it:
http://numbersixwasinnocent.blogspot.com/2009/08/mcgoohan-on-my-mind-ladies-and.html
I’ll be back next time with some more thorough dismantling of the lies and deceits created between 1979 and 1982 that persist to this very day in published accounts of this show, and the people who made it. Fact causes Friction it seems, whereas smooth lies only cause more fiction.
Posted by Moor Larkin at 00:59 2 comments: Links to this post