McGoohan in his own words: It is another adventure series, but a very different sort of character. It promises to be very exciting.

44 Years Ago Today
The formal meeting that began the making of The Prisoner took place
Saturday 16th April, 1966

In 1959, after reaching some kind of pinnacle in British Theatre and already being a well-regarded Television Play actor, Patrick McGoohan had plunged into what was to give him a lasting international status. The 39 episodes of Danger Man he made in 1960 had built him an increasing fan base in several countries around the world. However, as they were being transmitted throughout 1961-1963, Patrick McGoohan himself had been busy making several films, including two for Disney. As 1964 began, he was approached to revive Danger Man in a new, longer format and had agreed. Over the next 18 months he would make over forty more hours of prime TV. However as 1966 approached, he was ready to do something new. He later remarked that he had enjoyed the character so much, he wanted to end it before the standards previously set dropped. The first public hints of this were to emerge by December, 1965. He remarked in one newspaper that he already had plans to direct – and remarkably mentioned a TV series that would be 18 episodes long, as can be seen in this clipping. 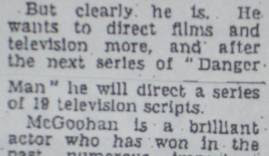 Was this some gestating Prisoner? The negotiation of this show has been mired in historical inaccuracy for years, by the very fans who purported to have researched it. Many accounts claim that McGoohan peremptorily resigned from Danger Man but no studio executives could claim to be baffled about McGoohan opting out of Danger Man in April 1966, because he had publicly been talking about it five months before!

By the early months of 1966, the circumstances surrounding the Danger Man project had reached a critical point. Ralph Smart had ended his association with the show and the decision by CBS not to buy any more shows for 1966 left little few options for Danger Man.

The continuation of our series is really very dependent on the American market," said McGoohan, "We sold CBS 22 episodes and would like to sell the network 22 more."http://numbersixwasinnocent.blogspot.com/2010/03/mcgoohan-in-mind-from-what-youve-been.html
McGoohan was ready to jump, but the show was being pushed aside anyhow. In April 1966 this report appeared on the front pages of the national press in England. Given that the quotes were hot news, they had evidently been made the day before,so when Lew Grade said, “Mr. McGoohan is coming to see me tomorrow” ….that meeting was actually taking place on 16th April 1966. 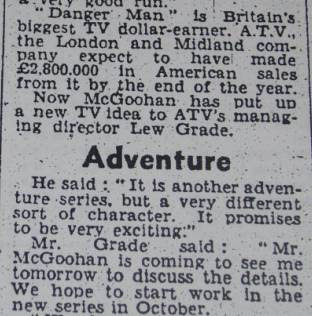 The 16th April, 1966 was a Saturday and it is worth recalling Patrick McGoohan’s 1977 explanation of the genesis of The Prisoner, to Warner Troyer:

“I went to the gentleman, Lew Grade, who was the financier, and said that I'd like to cease making "Secret Agent" and do something else. So he didn't like that idea. He'd prefer that I'd gone on forever doing it. But anyway, I said I was going to quit. So he said, "What's the idea?" This is on the telephone initially, so I met him on a Saturday morning at 7 o'clock.”
Although not fully explained, reading between the lines it seems likely that options for any continuation of Danger Man had become very limited. To move into colour would arguably have required more investment whereas without CBS involvement there would be less money available. Any possibility of Danger Man continuing, reliant only on British revenues must have been ruled out as the Winter of 1965 segued into the Spring of 1966. That CBS did cancel was confirmed the following year in more than one newspaper in America. This is one example of it being mentioned – in a letter-to-the-editor column. 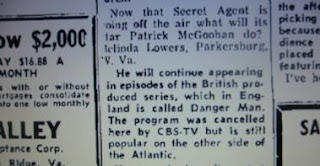 By a quirk of coincidence, tomorrow sees the first broadcast in Britain of The Prisoner (2009) starring a younger theatre contemporary of McGoohan, Ian McKellen. The Prisoner (2009) has adapted McGoohan’s Opus albeit with no overt acknowledgment of McGoohan’s creative legacy. Perhaps he wanted it that way; his prisoner was long ago in his own past. On the other hand, there never was a created by credit on the credit-list of The Prisoner, so the determination of creativity has ended up depending upon the legacy and opinion of TV history.

In the 34 years of fan clubs, there has been a gradual and generalised denigration of McGoohan’s pivotal position as originator and director of the 1967 series that provoked their very interest. Supplanting McGoohan with their own creation myth has long been accompanied by many absurd claims. I have of course covered this subject in several of my earlier blogs. The myth that first led me to take a closer look at all the tales of the prisoner production was the one about the fate of Living in Harmony in the US schedules of 1968. http://numbersixwasinnocent.blogspot.com/2009/06/who-controls-past-controls-future-who.html
However there is another equally absurd myth that also exists. It is endlessly repeated and was reported in an official prisoner magazine a few years ago. Here it is in print: 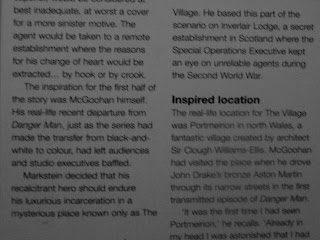 What is remarkable is that just two weeks after The Prisoner had been been formally green-lit, a book was published, written about the British SOE in WW2. It includes this passage:

Given the realities of political and military life of the late 1930’s and early 1940’s, S.O.E. ………………. training can be most seriously faulted is that agents ……………. unsuitable nevertheless in some cases slipped through into the field. This was hardly the training staff’s mistake; yet even they were not infallible. ………………………… If at any stage in the training process an agent’s nerve did fail, or it became clear to the staff that it would fail in the field, or any other strong reason against his dispatch appeared, a nice problem in security was posed; for the agent was bound to know by sight at least the people on the course with him………………….. and if he had reached Group B he might know dangerously much about clandestine techniques. ISRB maintained some workshops in the remotest Scottish highlands, at Inverlair; and to this ‘cooler’ refractory or unsuitable agents were sent, till the other agents they had known were out of harm’s way and it was safe to return them to the general man-power pool.
Inverlair, or the cooler and The Prisoner are often referred to by Official prisoner histories, but how grotesque is the suggestion that knowledge of this odd establishment inspired The Prisoner. Patrick McGoohan evidentially had the project underway before anyone even knew about Inverlair.

MRD Foot’s book was the sort of book that normally could have passed unnoticed, but a controversy had been raging in Britain since 1958, when rumours surfaced that had implied that the SOE had wasted many Allied lives in France through sheer incompetence. To counter these rumours the British government of the day had commissioned an Official History to be compiled from otherwise secret files within the Ministry of Defence. The eight-year research project was published on April 28, 1966.

Naturally, the US Army newspaper, Stars & Stripes featured a review of the book on the day of publication. It is no coincidence that this newspaper is often linked to George Markstein, with official books claiming that he worked worked for that publication. Real history reveals that he was merely a reader of it, along with thousands of Britons because Foot’s book, http://www.amazon.co.uk/Soe-France-Operations-Executive-Government/dp/0714655287 was a best-seller in 1966, even prompting questions about it's content, in Parliament that year.

My next blog will reflect upon a comment that McGoohan himself made when discussing the subject of the prisoner in the subsequent decades:

The series wasn't entirely a figment of my imagination, you know," McGoohan said. "There really are such places, all very secret, of course, where exactly that sort of thing goes on. "I know of one in the British Isles, another in Germany and one here in the United States. They provided me with just the sort of dramatic gimmick I needed to say something that very much needs saying."

More about prisoners and secret places in the early to middle decades of the 20th Century next time………. And how McGoohan’s village was no Inverlair, but did carry resonances of real places and real history and of course, several episodes of Danger Man.
Posted by Moor Larkin at 00:06 5 comments: Links to this post