George Markstein in his own words: “I am such an ordinary, insecure man, myself, that I like to imagine getting attractive girls into trouble or strong men into danger”

The title of my Blogroll, Number Six was innocent, was largely predicated upon the strange tendency I had noted that a whole sub-cult of The Prisoner had grown up over the years, which seemed to adopt a J’Accuse mentality towards the central figure of Patrick McGoohan - Producer, Director, Writer and Actor, who had made the object of their affections even conceivable in the first place, not to mention possible to even exist. Patrick McGoohan's key role in the The Prisoner was to be diminished.

These revisionists would have you believe that it was not Patrick Mcgoohan who was the instigator of The Prisoner. Not only that, but they would claim and infer that Patrick McGoohan was both liar and serial copyright thief, since this same sub-cult also insisted Mr. McGoohan only avoided explicitly making his prisoner John Drake, in order to swindle Ralph Smart from receipt of Danger Man royalties. Serious crimes indeed, but how to find a witness for the defence? Step forward blogger Moor Larkin - it seemed there was no jury in town, just a bullying lynch-mob so the only answer was to refuse to live in harmony with them. Fortunately villager Larkin had the Sheriff on his side, so all was not hopeless.

For some strange reason this sub-cult of The Prisoner gained the ability to resonate their peculiar version of history into the mainstream, and most published books seem to mirror their distortions and often their downright myths and untruths. I have highlighted the way this cult history has influenced otherwise dependable authors and lulled them into publishing statements that are not only palpably untrue but also completely fictitious. My last blog before this one summated how and when this had broken out into the mainstream, back in 1982, and I had thought my Blogroll would end with that one.

However, by a strange quirk of fate, my final two blogs attracted the attention of a gentleman who was a contemporary of George Markstein. His name is Sidney Allinson. Whilst most accounts label Mr. Markstein a man of mystery who might have been even a member of British Intelligence [!], Sidney labelled him as an American, “When I knew George, he was known as an American citizen, and certainly had an authentic-sounding strong American accent. Also, I recall him strongly hinting that he had been in the US Office of Strategic Services (precursor of the CIA.) Likeable as he was, George's co-workers took that with a pinch of salt.”

At first I was dubious about this new and quite conflicting information, but the very strangeness of it gave me pause for thought, and then I suddenly realised there was something very familiar about it too. In an official Prisoner book of 2005 this passage appeared in the pages that purported to tell the biography of George Markstein:

Many of my series of blogs have touched on the absurdity of much of the official biography proffered for Mr. Markstein. However the strange concurrence of Mr. Allinson’s memoir about Mr. Markstein passing himself off as an ex-spy, and that given in the *official* Companion, where he is again suggested as a ex-spy, suddenly struck a chord with me about an interview that George Markstein gave in 1973, just prior to the release of his 1974 novel that was based on “Inverlair lodge”, The Cooler. The quote heading up this blog is taken from that interview. Clearly this man made no even pretence to be a spy to anyone in the public, wider world, where his claims could be dissected.... and checked.

One thing that is also noticeable, is that in this interview, which was all abut George's new debut wartime Secret Agent novel, The Cooler, no mention was made of either Danger Man or The Prisoner. What is missing can often be just as significant as what is there, as Chesterton's Father Brown may or may not have said.


Together with my fellow-researcher I used the main clue given by Sidney Allinson to try to run this story finally to ground. After all, much of my Blogroll, where it appertained to George, had been wholly negative – stating how he had said (or been reported as having said) things that were evidentially untrue. I thought it time I redressed my balance and actually found out what WAS true about George Markstein. I recognised that if Sidney Allinson’s recall was genuine, then the obvious place might be to start with his recollection of George Markstein being employed as a journalist in Southport, England, in 1947, and aged somewhat older than he has always been reported as being. His birth-date has long been accepted as 1929, but this would have made him barely 18 in 1947. His presence in that Lancashire coastal resort, working for a small local newspaper would also make it impossible that he had been gallivanting around Europe working for MI5, just as his age would make it impossible that he had been working for the OSS. Following the clues so given, I discovered first that George Markstein was an active member of not any Intelligence service, but in fact, the Union of Journalists in the UK. This led to a record of his having obtained work in Reading in Berkshire, transferring from the Southport Guardian, in the same year that Sidney Allinson had known him – 1947.

What I next stumbled across is none of my work, but actually reinforces one of my most serious objections to all the false history-making that has been concocted in order to bolster the claims made by those Prisoner fans claiming some hidden mystery about the nature of the creative process that led to The Prisoner being produced. The background of George Markstein has been enormously embellished purely in order to add credence to the idea that a man with no experience in creative writing (George Markstein) had his genius stolen by a mere egoist actor (Patrick McGoohan). What is especially wrong about this, besides the fact that most of it is untrue, is that all this nonsense has served to mask an incredible TRUE story about the very same man - George Markstein - and his childhood and early adulthood.

Remarkably that story was already told, back in 1999, several years before the Noughties rash of official books about The Prisoner. The true tale of George Markstein’s background and early life is far more interesting that the fan-fantasy version. Perhaps it does not make George Markstein a hero, but it goes quite some way to explain why he was the secretive and mischievous man he became. It also makes his grabbing of the opportunity Patrick McGoohan gave him - providing him with his entrée into TV Script Editing - into an admirable use of the life opportunities that may only come to any of us, once in a lifetime. Mr. Markstein’s eventual final metamorphosis to become a successful novelist furthermore cements his real life story into one that is inspiring to anyone reaching forty and wondering if their life can ever become a little more exciting.

If you want to know the truth about Gustav Georg Markstein, born August 26th 1926 in Berlin, then I would urge you to get a copy of a book that demonstrates what research about the past is really about – scholarship and five years hard work. Michele Zackheim’s book is freely available at

http://www.amazon.co.uk/Einsteins-Daughter-The-Search-Lieserl/dp/1573228362/ref=sr_1_1?s=books&ie=UTF8&qid=1332687684&sr=1-1
Her search for the ‘lost’ daughter of Albert Einstein led her on an entertaining diversion to the apparent fantasist (but courageous woman nonetheless) Grete Markstein, an actress who was once with the prestigious pre-war Berlin National Theatre . She was the mother of a son, Gustav Georg, whose name later became anglicised to George. The book even includes a picture of George, aged 10.

Grete Markstein, George's mother﻿, was a single-parent and left Germany as part of the Jewish exodus in the 1930's; but also in part because she was apparently under threat from George's biological father. On her journey across Europe, she met a Polish Chemist, Sigismund Herschdoerfer, and as a couple they arrived in England in 1935 and were married in London, with George becoming adopted by Sigismund. He was 9 years-old by then. Sigismund was employed by Lever Brothers and the family eventually settled near Lever's world base at the time, in Ellesmere Port, Cheshire. After the tragically early death of his mother in 1943, George became estranged from his stepfather and once he reached his then legal age of accession of 21, in 1947 he appears to have had nothing more to do with him. His location at the time in Southport is explained by his step-father's house being in Bromborough, Cheshire - Southport being a short train journey away via the network of local railways based in and around Liverpool. Ms. Zackheim's book is primarily concerned with Grete Markstein's attempt, after 1935, to claim that she was actually the daughter of Albert Einstein. This would of course have led George to think he was the grandson of one of the most famous men of the 20th Century. Imagine his disappointment when he came to realise this was only a strange fixation of his mother, after all.


Michele loses track of George in 1947, just as Sidney did. He was last heard of in Michele's book, having absconded without repaying a £35 loan to his mother's oldest and best friend (equivalent to around £1,000 in todays's monetary value). I picked up his trail in Reading. My earlier blogs have explained his later arrivals in London, and his interest in writing for the 3rd US Airforce magazine in Ruislip in the mid-1950's, a fact made moor interesting now, with his 1947 associate Sidney Allinson's recollection of George Markstein being able to convincingly pass himself off as an American, despite being Austro-German by birth, and British by later naturalisation. A man of talent, who only need a direction it seems.

As I have continually discovered in my trek to ‘prove’ the innocence of Number Six, the truth is often hiding in plain sight – all you have to do is to ignore the self-proclaimed experts and find it. The truth about the man who was George, is radically at odds with much of his popularly-believed biography (check out his wiki-page if you want a good laugh). His background is also completely at odds with what he either told Prisoner fans, or allowed them to infer for themselves. Like most human beings however, his story is both poignant and fascinating and redolent of what motivated Patrick McGoohan when he led his team of contributors to create his paean to the glory of the Individual, whilst simultaneously mocking the very idea that any man can be truly free. The creation and perpetuation of so many untruths about George Markstein have done him no benefit whatsoever. Once revealed, falsehoods rightly make us distrustful of the sources of those deceits. Revealing the source is often difficult however. Mr. Markstein certainly had some circularities of his own to rotate the truth upon, but it can also be difficult to separate the fictions he created from the stories woven by his later cult followers. 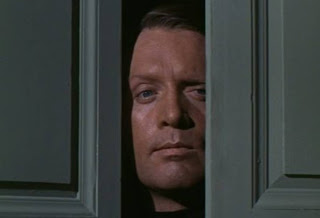 I’ll be seeing you, in all the old, familiar places.